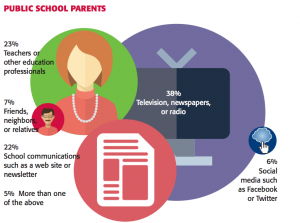 Most Americans get CCSS Info from sources outside of their school

PDK Gallop poll confirms that CCSS knowledge is a roiling battle for control of the narrative. While more people know about the Standards, and have formed strong opinions about them, the actual knowledge they have varies widely, with most people getting their information from TV, Radio, or other sources outside of the school district.

A big problem in the Common Core rollout is conflicting information. People are getting different signals from different places, all pushing their own agenda. 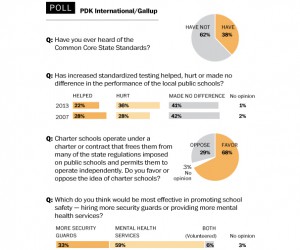 Anne O’Brien (@AnneLOBrien1) says: “Last year, just 38% of Americans had heard of #CommonCore. This year, 81%. Huge increase, but lots of what they “know” inaccurate #pdkpoll”

MY SCHOOL vs “THOSE SCHOOLS” 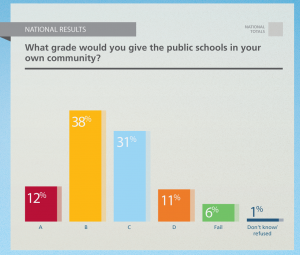 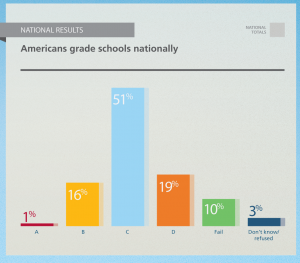 54% say that Charter schools are better than local public schools, though misconceptions abound: many think that charters can charge tuition, teach religion, and more. 63% oppose vouchers.

Joy Resmovits (@Joy_Resmovits) quotes Randi Weingarten (AFT President @rweingarten) “Sadly, we said it, we screamed it and now this poll shows it.”

So, 60% of American oppose the Common Core. 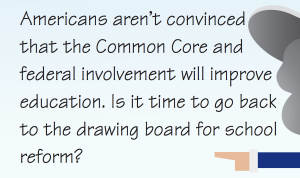 Cory Turner from NPR points out a key difference in 2 polls out today: The PDK/Gallop poll (discussed above) and the EDUCATION NEXT poll.

WHAT IS THE EDUCATION NEXT POLL?

A journal sponsored by Harvard’s Kennedy School, the Hoover Institution at Stanford and the Thomas B. Fordham Institute. While this poll found many of the same misconceptions about the Core, it differs from the PDK/Gallup poll in a big way. That difference stems from the way this poll asked the central question, about whether people support or oppose the Core.

Poll No. 1, out today, puts support for the Core at just 33 percent. But Poll No. 2, released yesterday, puts it at 53 percent. That’s a big difference.

Poll No. 1 found that misconceptions are, well, common among opponents. A majority said they believe the standards were initiated by the federal government. They worry that the Core will result in a national curriculum and national tests. And their biggest fear, says Bushaw, is that the standards “would limit what teachers could teach locally.”

Poll No. 2 asks the question differently! “As you may know, in the last few years states have been deciding whether or not to use the Common Core, which are standards for reading and math that are the same across the states. In the states that have these standards, they will be used to hold public schools accountable for their performance. Do you support or oppose the use of the Common Core standards in your state?”

The team at EdNext also put the same “do you support” question to a different group of people, but without using the words “Common Core.” 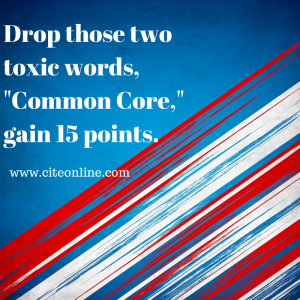 WHICH POLL DO I TRUST?

Highly respected and widely followed by the media, the PDK/Gallup poll is a reliable resource for families, education professionals, researchers, and policy makers. For 46 consecutive years, PDK’s goal in publishing the poll is to support a common desire to improve U.S. schools.

PDK’s partner for all 46 years is Gallup, the foremost name in polling in America and around the world. The poll is a scientifically based survey of more than 1,000 Americans 18 years and older. The report of the poll publishes all questions exactly as they were asked during telephone polling, which occurred in May-June 2014. A method statement is included in the poll report.

The PDK/Gallup poll is financed solely by the Phi Delta Kappa Educational Foundation, permitting PDK to offer an independent and unbiased report of American public opinion about its public schools. (http://pdkintl.org/programs-resources/poll/pdkgallup-poll-about/)

Get the pdf of the Common Core Gallup Poll here http://pdkpoll.pdkintl.org/

Get the pdf of the Education Next Poll here  http://educationnext.org/files/2014ednextpoll.pdf