Why Michael Mulgrew decided to back Sharpton’s rally is a complicated issue. (One we’re not equipped to unpack, much less judge, right now.) But nonetheless, this was a big misstep for Mulgrew, as the press is fanning the flames of an NYPD UFT fight.

If you missed the news about the NYPD UFT fight, check this source:

The NY Post story calls this an all-out war (perhaps missing the point that inflammatory statements don’t help reduce tension). Quick backstory: Al Sharpton is planning a rally to march overt he Verrazzano bridge on 8/23. The Mayor has said it’s not a good idea, and would “tear the city apart.” Michael Mulgrew, UFT president is supporting the march. The police union is angry, because it’s a march against police brutality. 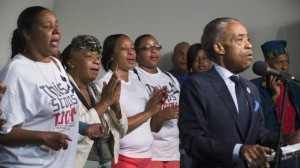 Al Sharpton and the family of Eric Garner

Mulgrew on why he’s supporting the march

“Mr. Garner’s death was a tragedy for the city,” UFT President Michael Mulgrew said when asked about the union’s involvement. “Teachers want to help ensure that something like this doesn’t happen again.”

One top NYPD union leader said he’s troubled by the UFT’s actions. “Mulgrew is always on the wrong side of the issues, and I’m not surprised,” said Ed Mullins, head of the police sergeants union. “The UFT has other issues. This is not their issue.” 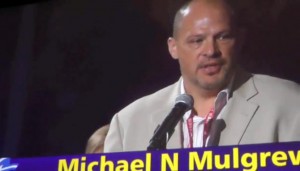 What is this rally about?

The Post bills Sharpton’s rally as “anti-police.” Sharpton bills the rally as “A march for victims of police brutality.”

So, what is it about?

A big question we have is: why would one of the biggest municipal unions in the city come out against another?

Here is what people are saying about the NYPD UFT Fight:

I’m no Michael Mulgrew fan. But I support his decision to participate in the #EricGarner march. All who care for kids should too #edreform — RiShawn Biddle (@dropoutnation) August 18, 2014

.@TeacherArthur I support police but oppose police brutality as I believe most people do. I take issue with UFT marching with Sharpton. — Mary Ahern (@mma718) August 17, 2014

@siadvance @UFT @TheRevAl as a uft member I assure you, I don’t back Sharpton. As a matter a fact I don’t know one teacher that backs fat Al — KevinP (@KPSBKLYN) August 17, 2014

Nice job UFT not polling the members many incensed of your support for Sharpton. Should make great relations with teachers & cops — John Q. Public (@sherlockhomz) August 18, 2014

Click here to see the Petition to remove Mulgrew

PBA President Pat Lynch said, “It is absolutely ridiculous that [Mulgrew] . . . would waste his members’ dues to get involved with a march that has nothing to do with teachers or his union. 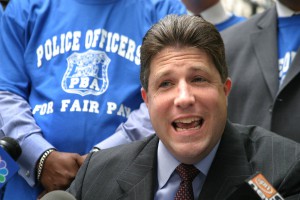 “Mulgrew knows that the UFT is under siege from all sides, and this is purely an attempt to distract attention from that mounting criticism,” Lynch wrote, referring to the union’s chronic battles over teacher tenure and charter schools as well as the “substandard” contract Mulgrew recently negotiated for his membership.

“How would he like it if police officers lined up with the activists who oppose his efforts to shield bad teachers and undermine effective charter schools?” Lynch fumed.

Mulgrew’s Common Core Speech comes back to haunt him

Lots of people are citing Mulgrew’s (perhaps misguided, tone-deaf, etc) speech in support of the common core to Randi Weingarten — quoting him saying he’s going to “punch you in the face and push you in the dirt,” in support of this petition to get him to step down.

Here’s a clip — you can see from the context that it’s not really connected. Whatever Mulgrew was trying to say, which seems like “teachers are in charge of implementing the common core standards, and we fought for that, so don’t take that away from us,” could have been said better. But the fact that this quote is connected in some way to this discussion of his support of the anti police-brutality march doesn’t make sense. It’a a non-sequitor ad hominem attack (granted, that he alley-ooped, but still, it’s not relevant).

More on this here

CITE is the Center for Integrated Training and Education .

Event: NYC is promising to revamp how students learn to read. What will it take?