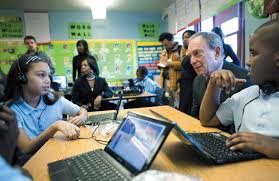 We are going to see a fierce debate about the legacy of Mayor Bloomberg’s educational reforms as he leaves office and we gain a new mayor and chancellor.  The fight, I think, will center on the following issues:

Small High Schools.  The debate will center  on whether this is a good use of scarce resources (money).  The studies are mixed about the impact of small schools on test results, graduation rates etc.

Alternative modes of teacher and principal recruitment.  These will be big, big battles because some of the funders of these programs believe that there is no correlation between what they call pre-service and the outcomes produced in the schools.   They also believe that at least some of the problems in schools are teachers who haven’t performed at intellectually elite levels in college.  I’m particularly skeptical about the claims that principals who have no or little classroom experience and come through alternative certification paths are as successful as traditionally trained principals.  My skepticism is based on how unlikely I think they are to be granted legitimacy as leaders by the teachers in their buildings, because of their lack of background.

Structural changes in the school system.  This includes giving principals more control of their budgets, and also the reorganization away from geographically based central offices to the web of network organizations that oversee schools.  I suspect that the move to networks simply adds complexity.  There are good networks and bad networks, just as there are good districts and bad districts, probably based on the quality of the leadership at any given time.

Bloomberg owed nothing to educators, and his many reorganizations of the schools reflected his disregard for the traditional power structures.  How the new mayor and chancellor approach these issues will be fascinating to watch.

What do you think will be the main points of contention?  Weigh in on our Facebook page, or on Twitter.

Jared Gellert is the executive director of The Center for Integrated Training and Education .

For more information on our teacher certification programs, click here.

Click to read impressions from our Counseling and Administration alumni.