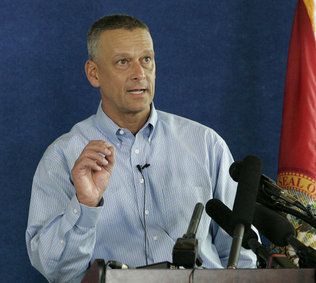 The Bennett Resignation From Many Angles

Last week, Tony Bennett (not the singer) stepped down as the commissioner of Florida schools. He was also the former head of Indiana schools. He is accused of manipulating the school rating system in IN, in order to benefit a charter school. This is a complicated story involving political donors, school vouchers, and school reform. Certainly the first word on Bennett will not be the last as more is uncovered. Who wanted him out? Why? What did he actually do? How does this affect Florida or Indiana’s school reform initiatives? What’s NYC’s charter school situation?

Luckily, we’re here to break it all down for you! We found a lot of great resources. People smarter than we are have written very well on all sides of this issue, and we put them all together, so you don’t have to hunt around!

Here is video of his resignation, and a pretty fair article from Indiana calling him a “rising star in school reform.”

Bennett maintains that the decision to step down belongs to him, and not Florida Governor Rick Scott. He insists he did not manipulate the very A-F school grading system that he himself pushed. In fact, he calls for an investigation into his actions in the IN schools in 2012, in order to, as he said, “put this issue to rest.”

How did this rising star suddenly flame out?

Video – The Rachel Maddow team breaks down the scandal, focusing on the fact that the school in question, Christel House Academy Charter School, was named for a huge GOP donor (who is also calling for an investigation).

Indiana’s current and former State Superintendents are using this spotlight to call for a review of the whole state grading system.

As is the American Federation of Teachers:

How does this affect public schools in IN and possibly elsewhere?

Hint: the “break” Bennett gave the charter school could have saved two schools from takeover by the state.

Meanwhile, United States Secretary of Education Arne Duncan “doesn’t seem worried about the larger, federal-policy implications” of the Bennett issue. He doesn’t say whether he thinks Bennett actually did anything wrong.

And Former D.C. Schools chief, Michelle Rhee has come out in support of Bennett

What is the state of charter schools in NYC? Today’s Daily News has a quick article on the money side of it.

The whole situation asks us to look harder at school systems: not only at single issues like vouchers, grading, assessments, standards, or accountability. Whatever side you’re on, of whatever issue, educational policy always comes down to implementation.