The CSA is reporting that the CSA contract negotiation is going to mediation. 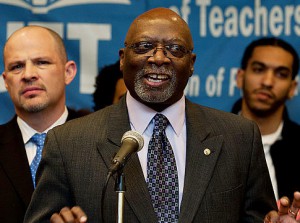 How did this happen?

As the CSA Contract goes to mediation, the CSA credits their Letter Writing Campaign which asked members to write to the Mayor, telling him why they need a contract now.

This is from the CSA site:

In an email blast to the membership, Mr. Logan (CSA President) said, “We need your help. Please write a letter to Mayor de Blasio about the city’s unfair positions in contract negotiations.”

Negotiations began in early summer, but bogged down over the retroactive pay as well as other issues including workload.

The retroactive pay issue arose as a result of the city’s contract with the UFT. Teachers who leave the UFT became ineligible for retroactive pay because, the city claims, they are not “continuously” employed. The city contends that continuous employment means working as a member of the same bargaining unit and not as an employee of the city, a contention CSA strongly refutes.

CSA’s contract expired in March of 2010 but remains in force under state law until a new contract is signed.

Martin Scheinman, who helped the UFT resolve their contract negotiation, is handling the mediation. The city and union are stuck over the issue of back pay for administrators who worked under the expired UFT contract, and have started working under the CSA contract since the old UFT contract expired in 2009.

The CSA contract expired in 2010, and the union is required by state law to keep working under the expired contract until a new one can be negotiated. CSA President Ernest Logan says that time is now.

Here’s one Principal’s take, from the CSA newsletter

A Principal at the Scholars’ Academy in Rockaway Park said he and his colleagues have dealt with constant changes
and upheaval within the DOE. “We ask that you consider our union’s position that ensures those new optimistic
administrators, who had the courage to reach for the mantle of leadership beneath the Damocles Sword in the midst
of the most intense educational reform ever, are treated with the same respect and equity as we veteran
administrators.

And another, also from the CSA newsletter

In a letter to City Hall provided to this newspaper, Patrice Edison, Principal of P.S. 264 in Bay Ridge, said school
administrators in the city “breathed a sigh of relief” when Carmen Fariña, a former Principal, was picked to lead the
city’s schools. As a Teacher promoted about 12 years ago, she added that she received retroactive pay negotiated
under the previous round of contracts.

“That is why I am puzzled by your stance that Teachers who now wish to move up into administrative positions, or
who have recently done so, such as my Assistant Principal, should suffer tremendous financial penalties for doing
so,” she wrote. “To say that they have not performed continuous service to the children of our city is absurd.”

Whom does this affect?

There are about 1900 administrators in the city, who worked under the UFT contract. The CSA maintains that they are entitled to the backpay they earned in this round of UFT negotiations, since they were working under the expired contract.

How is the backpay going to work?

Here’s how the money payouts would look, again according to the CSA newsletter

The majority of the money in question comes from two 4-percent raises retroactive to late 2009 and 2010. If the de
Blasio administration and the CSA agreed to similar terms as those in the UFT contract, the former Teachers would
be paid 12.5 percent of their retro money in October of 2015 and 2017, then 25 percent each October from 2018 through 2020.

The union has also filed a grievance about how the UFT contract restructures the school day. For administrators, the PD and Parent Outreach time, which takes the place of the 37.5 minute instructional blocks for teachers, adds about 40 minutes to their workday. The CSA holds the position that the city cannot unilaterally change their workday.

To take part in the letter writing campaign, use this contact info:

Please email a copy of your letter to askcsa@csa-nyc.org

You may also submit your letter on the following website page, but it cannot be longer than 300 words: